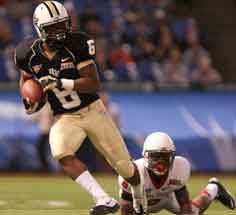 NFL 2014: University of Central Florida (UCF Knights) face PennState in their 2014 Season opener in GAA HQ on the 30th August 2014. Coach O’Leary has the Knights playing at their highest level ever. He took over the program ten years ago and has rebuilt it from the ground up. The Knights’ two signature victories of the season past were against previously undefeated and #8 ranked Louisville, which followed on the heels of their win in Beaver Stadium in September over the Penn State Nittany Lions. UCF (Knights) and Penn State will open their NFL 2014 campaigns August 30, when they meet in the inaugural Croke Park Classic in Dublin, led by two of the most highly regarded college coaches. George O’Leary and Bill O’Brien have previously worked on the same staff at Georgia Tech. It’s shaping up to be a great battle of these two giants of American College Football this August. It will be the first time that UCF and PennState have played outside the United States guaranteed to bring huge fanfare and significant travelling support.