Turf n Surf – must you be mad to surf in Ireland? No, but it helps!

‘Hey I’m Pawel!’
’Hey everyone this Pawel, Pawel this is everyone…’
That is how it started. We got to know each other names, got in the bus and got moving. Time to surf in Ireland!

The weather was great, beautiful cloudy sky and constant drizzle, typical Ireland. We had a long way ahead of us, and it was kind of a quiet and fragile atmosphere inside the bus, no one really chatting too much yet. The destination for the day was Galway and the Cliffs of Moher; a site well known for its outstanding natural beauty. As we approached the Cliffs, the shock! Visibility for 25 meters at most, we felt like we are inside a cloud. But another surprise, 15 minutes after we got our tickets, the fog disappeared completely! It was wonderful to see Cliffs in their full glory, huge towering rock faces rising straight from the sea, that place is truly breathtaking. 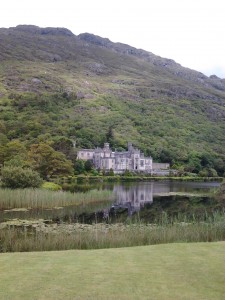 By the time we left the Cliffs, everyone had met and mingled, and people were happily chatting away and making new friends. Later on we enjoyed lovely food and drinks in Galway, where the Street Performance Festival was taking place giving us some lovely entertainment while we ate. Excellent musicians and jugglers pulled in the crowds giving the city a carnival atmosphere. It was a cosy hostel we stayed in too, Galway City Hostel, fresh and funky place, cool spot right at the corner of main square!

Second day; off to Conemara for exploring, hiking, oysters, and the Coffin Ships Memorial, and everything else that comes with the North-West coast of Ireland. We had another fantastic stop; the Kylemore Abbey and St Patrick Stack, or as the others preferred ‘The Reek’, a highly significant mountain in CountyMayo for religious reasons. In fact every year it is climbed by pilgrims on the last Sunday in July. I’m just glad they did make us go all the way up! The day finished in Bundoran, again food and drinks with a savage sunset, and some craic in the local Pub. 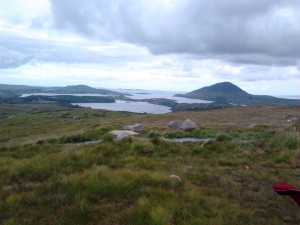 Now, day three; time to surf in Ireland! The day was most spectacular of them all. Especially for all those amateurs like me that were looking forward to seeing what this surfing thing was all about. I’m just going to say that it was extremely good day and I think the rest of the group will completely agree with me. All the crew of Turf n Surf were amazing, great people, well organized and chilled, not even mentioning how skilled surfers and instructors they were. They got all of the newbies standing and surfing within the first hour, and those with some experience got a chance to head further out and catch some of the real waves.

The surf hostel was cool too, nice, large kitchen, rooms with en-suite bathrooms, lots of common areas, free wi-fi, everything else – you name it! By that time we were all enjoying the craic, surfing gets people closer, no doubt (the free beer helped as well!)

Last two days of the tour we were hanging around Northern Ireland. Giants Causway and Belfast were our main destinations, but we stopped in some wacky places on the way including The Dark Hedges. Much of the second episode from second season of Games of Thrones was shot there. Definitely one to check out GoT fans.

Last spot on our journey was Belfast; it’s obvious from arrival that it is great city. Very different from Dublin, you can still feel that there was something going on there, or it is just my imagination? I think there is something in the air. Anyways, the people who went to do Black Taxi Tour around revolutionary spots, like Shankil and Falls Roads were touched deeply by driver stories and direct connection with victims (not included). Some went to TitanicMuseum, which is another excellent choice, but out in the Shipyard, away from City Centre it’s a bit of a commute to get there. There’s a great vibe in Belfast during the regular weekday, with fresh food street markets, good coffee and as always – craic.

As we were spending more time with each other on the bus, in the hostels and around the destinations the bond between us was getting tighter. We all had great time on our last night in Belfast, getting some food in an Italian restaurant and then some drinks in another local Pub, where we got a drinks voucher (thanks Turf n Surf) that got us started on our hangovers.

Anyways beautiful people, if you are tired with the city, and want to check some more of this stunning GreenIsland with a small crew of cool people, check out Turf n Surf. A lot of companies provide tours around Ireland, but none surfs with, hangs with you, and enjoy the craic with you like you were BFFs from childhood apart from TnS.
Big thanks to everyone at Turf n Surf – Killian, Kate, Paul, Brian , Giles, Joe, and all the others, sorry I forgot some names, you all are great people, very committed and cool as hell!